15 min.
Software as a Service (SaaS) – All You Need to Know
INTechHouse BLOG

Software as a Service (SaaS) – All You Need to Know

Slipping through the Internet recently, you can see frequent requests on the topic of “what is SaaS”. Since this service is becoming more and more popular among various types of businesses, we need to pay attention to the pros and cons of SaaS usage.

The vast industry growth this year and the following year’s predictions in working with SaaS speak only about one thing – this topic should not be missed. Therefore, we decided to dedicate our first post to this topic. And if you still do not know what it is and what it is eaten with, we will be happy to tell you more and share the InTechHouse experience.

A SaaS business model provides a wealth of advantages that should serve the interests of any business size. SaaS provides businesses with unmatched opportunities to aid their growth, expansion, and ability to offer more value to staff and clients.

So, what is SaaS? Software as a Service, or SaaS, is a cloud-based service where you access an application through an internet browser instead of downloading software on your desktop PC or company network to operate and update. The software program might be any of the many available SaaS business models, including unified communications, office software, and other types of SaaS solutions.

The History of Saas

The practice of centrally hosting corporate applications dates back to the 1960s when companies that provided mainframe computers operated service bureaus, often known as time-sharing or utility computing.

These services are offered to process power and database storage from their global data centres’ significant corporations. Application service providers (ASPs) are a new form of centralised computing that emerged due to the Internet’s growth in the 1990s.

The ASP model’s basic tenet is expanded upon by software as a service. SaaS originally appeared in the products and services description of a trademark application submitted to the USPTO on September 23, 1985. The phrase and definition of SaaS are frequently used in more particular contexts.

As of 2012, SaaS suppliers often build and maintain their software, unlike most earlier ASPs, who concentrated on managing and hosting the software of independent third-party software vendors.

Early implementations of ASPs frequently featured more conventional client-server applications that required users to install software on their personal computers; subsequent versions can be Web apps that can be accessed solely through a web browser.

Most early ASPs had to maintain a different instance of the application for each business due to the software architecture they utilised. Since 2012, SaaS services have adopted the multi-tenant architecture, which allows the application to cater to several different organisations and consumers while segmenting its data appropriately.

Analysts have been studying SaaS for a long time. According to experts, on average, after applying the saas technology, the project receives a revenue churn of about 6%, which is a low and acceptable result for the business. After the SaaS implementation, companies, in most cases, respond positively to the service and show the impact of 100%+ revenue retention rates. 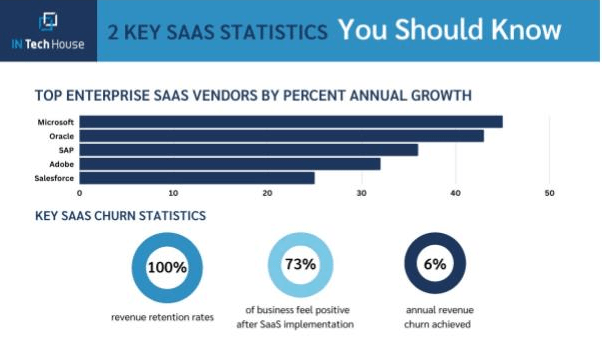 The software market is improving, and it can require dynamic changes from the business to stay afloat. Companies should be aware of all changes and trends to provide their customers with the most exciting products or services.

Recently, many companies are ready to switch to the cloud because it increases flexibility, allows them to save on equipment, and gives quick access to resources. By 2023 the cloud SaaS market is estimated to reach $195 B. SaaS applications are run in the cloud and are usually accessible through desktops and mobile applications, as well as through a web interface. 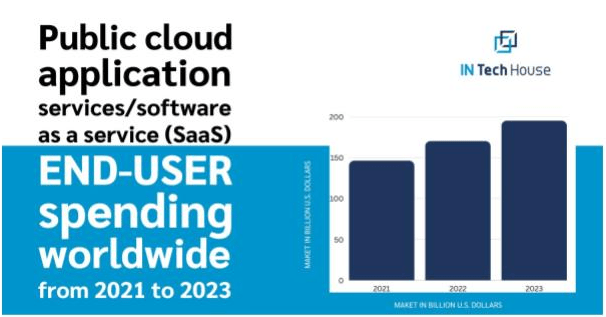 SaaS and the cloud as a whole can work wonders. However, if companies have moved to the cloud, their success process isn’t guaranteed. It is necessary to constantly optimise processes, find suitable development channels and control the quality of the service received. To get the most out of the SaaS cloud, companies must find a reliable service provider who can provide advanced employee training, better security and high-level compliance. 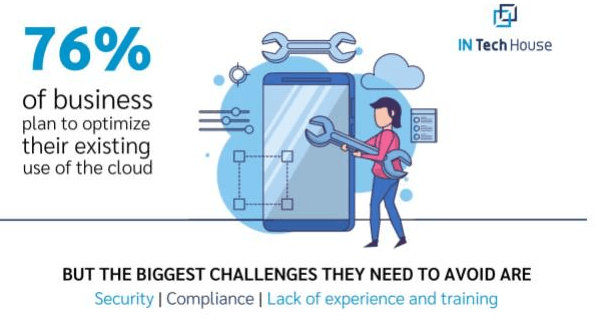 Some companies, especially with significant financial constraints, resort to the services of providers whose rates are low. However, low rates may hide the poor quality of services and lack of experience with SaaS innovations and the search for the best solutions.

If a business has entered SaaS without an experienced provider who guarantees security, then the project may be at risk. With a huge number of competitors in the market, you should pay attention to companies with an open SaaS portfolio to confirm their experience.

Any company that incorporates collaboration in its activities can use Saas. Sectors leading the way in SaaS adoption include government, healthcare, finance, education, and engineering. Businesses in sectors including services like IT and consulting, marketing, and advertising frequently employ SaaS.

The Advantages of Using SaaS

SaaS models offer businesses many advantages, including the following: 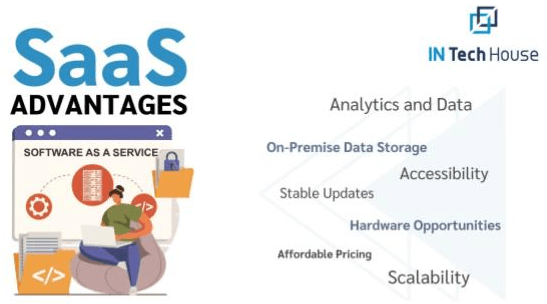 Any SaaS application has the benefit of being accessible via an internet browser, regardless of the operating system used to access it.

SaaS eliminates the need for expensive hardware infrastructure, enabling even the tiniest organisation to utilise software tools through cloud apps that were previously only available to larger companies.

SaaS is scalable in that if you need to increase or decrease the number of customers using your service, you alter your pricing plan appropriately rather than purchasing additional gear while growing.

SaaS pricing can be more affordable and available to enterprises of all sizes because suppliers have a wider market reach.

On-premise data storage requires reliable backups to guard against catastrophic hardware failure and data loss. SaaS uses the cloud to store data; users may switch between devices without losing work by logging into a single account.

Since a single platform controls everything, collecting data and making it available for analytics is simple. This service makes it possible to implement efficiency improvements and simplify procedures.

Let’s talk about your SaaS advantages!

We have been leveraging SaaS to address business issues to build high-quality tech solutions to provide the most possible business value on time and within budget. Our In Tech House focuses on minimising “scope creep” and controlling “gold planting.”

We provide reliable large-scale software solutions based on microservice architecture design and corporate objectives. Our software engineers are working with various ready-made SaaS and cloud solutions for startups and businesses that need to quickly construct cutting-edge cloud computing services and apps.

So, we want you to show us the latest SaaS projects we are proud of.

Our client needed to create info publications on the waste collection schedule in two information channels: web and print. The challenge in this project was an inconsistent source of data partly manually edited, that had to be automatically fixed by software. They asked us about building a serverless waste collection data processing system for all buildings in the city, with input data correction algorithms and a module for the wholesale generation of files for printing.

The developed software we made has several functions that correct the imported data. In addition, the function of correcting individual dates in the calendar has been made available. Information about the schedule for personal addresses in the city is available via the website and the module of wholesale cooperation with the printing house. Everything is hosted in the AWS cloud.

As you may know, we adore adding value to each project to make it more efficient and attractive for the end-users. The previous solution based on direct integration with the database contained many errors that were solved by the corrective algorithms in the new solution.

In addition, the optimization of the printed schedule resulted in a reduction in printing costs.

Our client is a company which provides retailers and manufacturers with advanced technology related to machine learning and image analysis. Since 2010, they have been creating tailor-made, innovative solutions for retail customers.

They needed to provide efficient customer service and technical support through a hotline divided into individual partners.

Our efficient solution was the implementation included the launch and maintenance of the virtual PBX service with the IVR System module for eight hotline numbers and eight consultants. Tech House’s main goal was to create the best conditions for clients and consultants. Access to the IVR module of the System allows the company to view live all helplines, queues and agents during work. The helplines have been divided into MarketLAB Partners, which allows for filtering incoming traffic, the efficiency level of service and the consultants.

Why Should You Use Saas?

SaaS offers several advantages for businesses, including lower upfront costs for commercial software, eliminating the need to install software on individual computers, service scalability for corporate development, interfaces with other software, and quick updates for all users.

The fact that the software is constantly updated is another significant advantage. The ability to use the program on many devices and according to your preferences is the best possible advantage.

Currently, many businesses can use the services of SaaS and get significant benefits. If you need an exciting software solution and do not want to spend much money, it may be worth paying attention to this service. SaaS can provide you with

Are you still thinking about SaaS services in your project? Is it worth implementing or not?

There are two essential SaaS components: a CRM system and marketing automation.

Software as a service (or SaaS) is a way of delivering applications over the Internet—as a special service. Instead of installing and maintaining specific software, companies simply access it via the Internet, freeing themselves from complex software or hardware management. It costs less money and spends less time on development.

Let’s change the World
TOGETHER!

A SaaS business model provides a wealth of advantages that should serve the interests of any business size.

What is SaaS?
SaaS Meaning
The History of Saas
SaaS Market Overview
Who Uses SaaS?
The Advantages of Using SaaS
Our Saas Experience
Why Should You Use Saas?
Conclusion 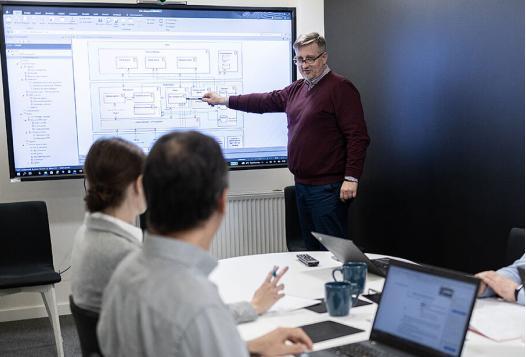 We restore the natural balance and improve the quality of life for future generations!

Software as a Service (SaaS) – All You Need to Know